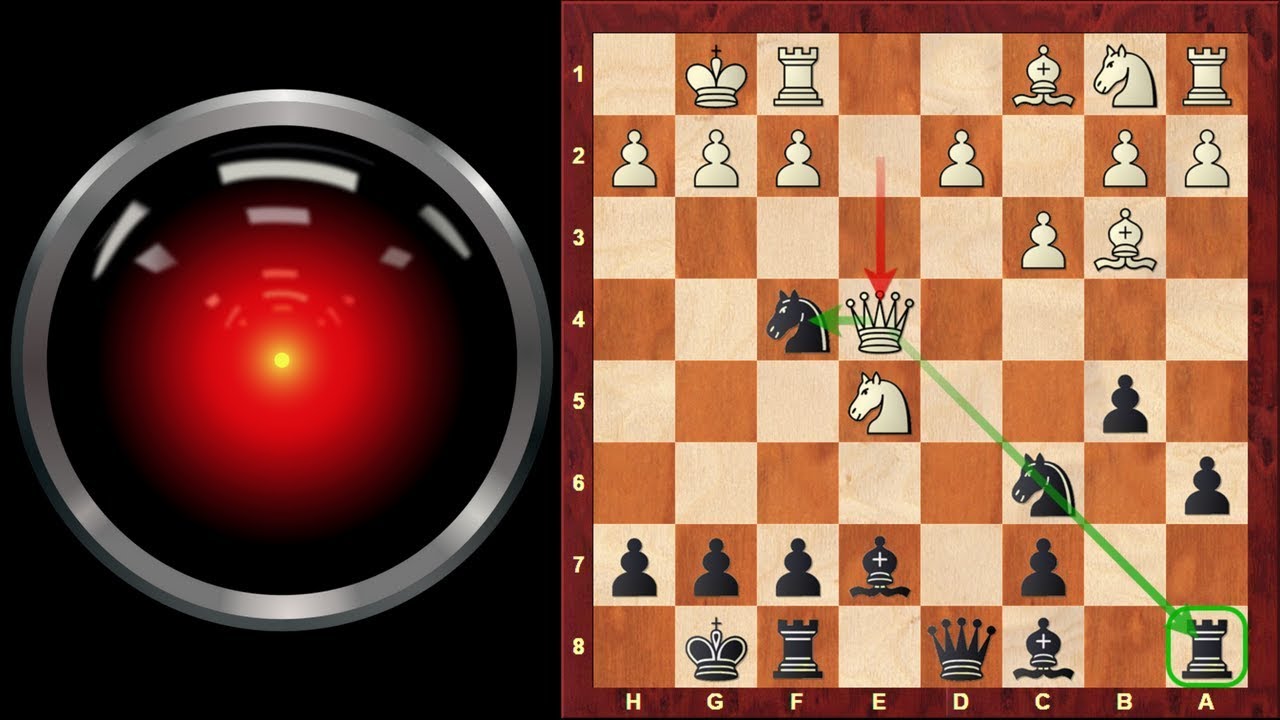 {Poole – HAL 9000 is a fictional chess game in the movie 2001: A Space Odyssey.
In the movie, the astronaut Frank Poole is seen playing chess with the HAL
9000 supercomputer. As HAL is supposed to be infallible, no one is surprised
when HAL soundly defeats Poole (though the novel mentions that HAL is
programmed only to win 50% of the time in order for there to be some point in
the astronauts ever playing). The director Stanley Kubrick was a passionate
chess player, so unlike many chess scenes shown in other films, the position
and analysis makes sense. The actual game seems to come from Roesch – Schlage,
Hamburg 1910, a tournament game between two lesser-known masters.[1]} 1. e4 {
Space.. cold.. likecalculation!} e5 {HAL 9000 is a fictional computer in
Arthur C. Clarke’s Space Odyssey saga. It was ranked #13 on a list of greatest
film villains of all time on the AFI’s 100 Years… 100 Heroes and Villains.
HAL (Heuristically programmed ALgorithmic Computer) is an artificial
intelligence, the sentient on-board computer of the spaceship Discovery. HAL
is usually represented only as his television camera “eyes” that can be seen
throughout the Discovery spaceship. The voice of HAL 9000 was performed by
Canadian actor Douglas Rain. In the book, HAL became operational on 12 January
1997 (1992 in the film)[1] at the HAL Plant in Urbana, Illinois. His first
instructor was Dr. Chandra (Mr. Langley in the film). HAL is depicted as being
capable not only of speech, speech recognition, facial recognition, and
natural language processing, but also lip reading, art appreciation,
interpreting emotions, expressing emotions, reasoning, and playing chess, in
addition to maintaining all systems on an interplanetary voyage. HAL is never
visualized as a single entity. He is, however, portrayed with a soft voice and
a conversational manner. This is in contrast to the human astronauts, who
speak in terse monotone, as do all other actors in the film.} 2. Nf3 Nc6 3. Bb5
a6 4. Ba4 Nf6 5. Qe2 b5 6. Bb3 Be7 7. c3 O-O 8. O-O d5 9. exd5 Nxd5 10. Nxe5
Nf4 11. Qe4 Nxe5 12. Qxa8 (12. Qxe5 Bd6 13. Qe4 Qh4 14. Kh1 Bg4 15. d4 (15. f3
Ne2 16. h3 Ng3+ 17. Kg1 Nxe4) 15… Rae8 16. Qb7 Qxf2 17. Nd2 Re1) 12… Qd3
13. Bd1 Bh3 {The position after 13…Bh3, and the ones that follow, were used
in Stanley Kubrick’s movie “2001: A Space Odyssey” for the game between Frank
Poole and the HAL-9000 computer.} 14. Qxa6 Bxg2 15. Re1 {Kubrick’s father
taught him chess at age twelve, and the game remained a lifelong obsession.} {
Eventually, he sought jobs as a freelance photographer, and by graduation, he
had sold a photographic series to Look magazine. Kubrick supplemented his
income by playing chess “for quarters” in Washington Square Park and various
Manhattan chess clubs.[9]} Qf3 16. Bxf3 Nxf3# 0-1 ►Subscribe for my regular chess videos: ►Support the channel by donating via PayPal:

Thumbnail
Hal
By Cryteria (Own work) [CC BY 3.0 ( via Wikimedia Commons

#KCChessEngines
♞ Challenge KC and others for turn style chess at